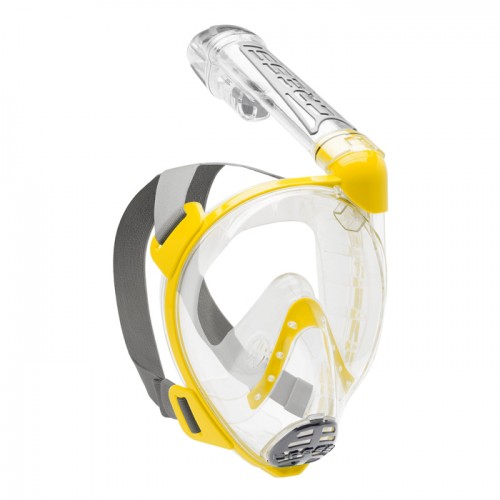 The Duke project required in-depth design and air circulation studies, both inlet and outlet, to solve the usual problems with these masks in competing models and to make the Cressi face mask particularly safe in any situation.
The position of the lateral breathing tube and the fact that it does not require the closing or opening of valves for its operation, guarantees a high flow of power, unthinkable in other similar models, especially in case of fatigue or stress.
The outlet of the stale air is also produced by a second channel integrated in the tube, with a powerful "chimney" effect which prevents the accumulation of a percentage of this air in the breathing area.
Duke's air circulation is far superior to that of any other similar mask on the market.
We had the opportunity to test it in the laboratory of the Engineering Department of the Polytechnic of Milan, where the results exceeded our expectations.
The breathing system that we designed and patented does not require the need for forced breathing to travel a greater distance and open more than one valve, an existing problem on the masks with the central tube.
The double section of the tube allows you to connect them one to the breathing chamber and the other to the viewer.
This advantage is reinforced by the fact that neither the breathing chamber nor the tube have valves that prevent the user from breathing.
This design, combined with the deflector which directs a small flow of air entering the viewing area, ensures the absence of exhaled air inside the mask, drastically reducing the tendency to fogging and maximizing air extraction warm produced by the face when wearing the mask, and is designed to function as a chimney effect that forces air circulation away from the lens.
The mask design allows for a wide view of the seabed without distortion.
The hose has a valve system with a watertight float, which prevents water from entering both in the event of waves and from completely immersing the head.
The watertight seal of DUKE is guaranteed by three large DRAINAGE valves which act only if the water enters the vision area (2 valves) and the breathing area (1 valve).
The transparent or black silicone facepiece, according to Cressi tradition, has been designed for a fantastic adaptation to all types of physiognomy with only two sizes: S / M and M / L.

IMPORTANT NOTICE: Mask for observing the seabed from the surface.
It is not possible to compensate the ears, therefore it must not be used in immersion below 1.5 m of depth.

sSpese di spedizione: Shipping costs are free for orders over 49€.Ordinary shipments have a cost of 7€.The shipping cost is in any case calculated on the basis of the items in the cart and clearly visible.