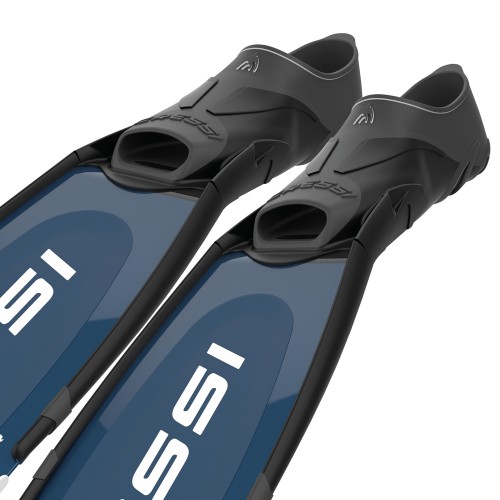 The new Gara Modular Sprint fin is a shorter version of the Impulse fin, which has proved extremely popular with freedivers all over the world, both amateurs and the most demanding professional freedivers. This is also confirmed by the large number of articles dedicated to it by specialized journalists in sector magazines.
Sprint is designed to meet the needs of freedivers and spearfishermen who practice this sport in winter and when a fin as long as Impulse is not needed.
Both fins have been designed using expensive finite element software programs that allow you to define highly complex and equally performing sections.
The Sprint blade, like the Impulse blade, is made of a single thermoplastic elastomer, although it would be more correct
refer to an angled sublevel and overlay. The sublevel follows
the shape and size of almost the entire fin. It has a uniform thickness and a flexible longitudinal propulsion wing of variable length. The so-called overlay, on the other hand, selectively covers the propulsion wing and has a thickness ranging from maximum to zero longitudinally towards the tip of the blade.
Consequently, the fin offers a new way to store and release elastic potential energy, greatly helping the movement of the freediver's legs and thus ensuring a marked improvement in propulsive power.
When disassembled, the shovel and foot pocket take up the space of a normal snorkel fin.

TECHNICAL FEATURES
- Excellent propulsive performance without tiring anyone, beginners or professionals
- Foot pocket in thermoplastic rubber, Full Contact certified
- Standard blade / leg strap interface with screws under the foot pocket and side clips
- Blade in extremely thin and light compound of elastomerized technopolymers developed by Cressi with different thicknesses
- Stringer made of technopolymers with elastomeric loads with a high flexural modulus
- Footrest / blade angle of 29 degrees